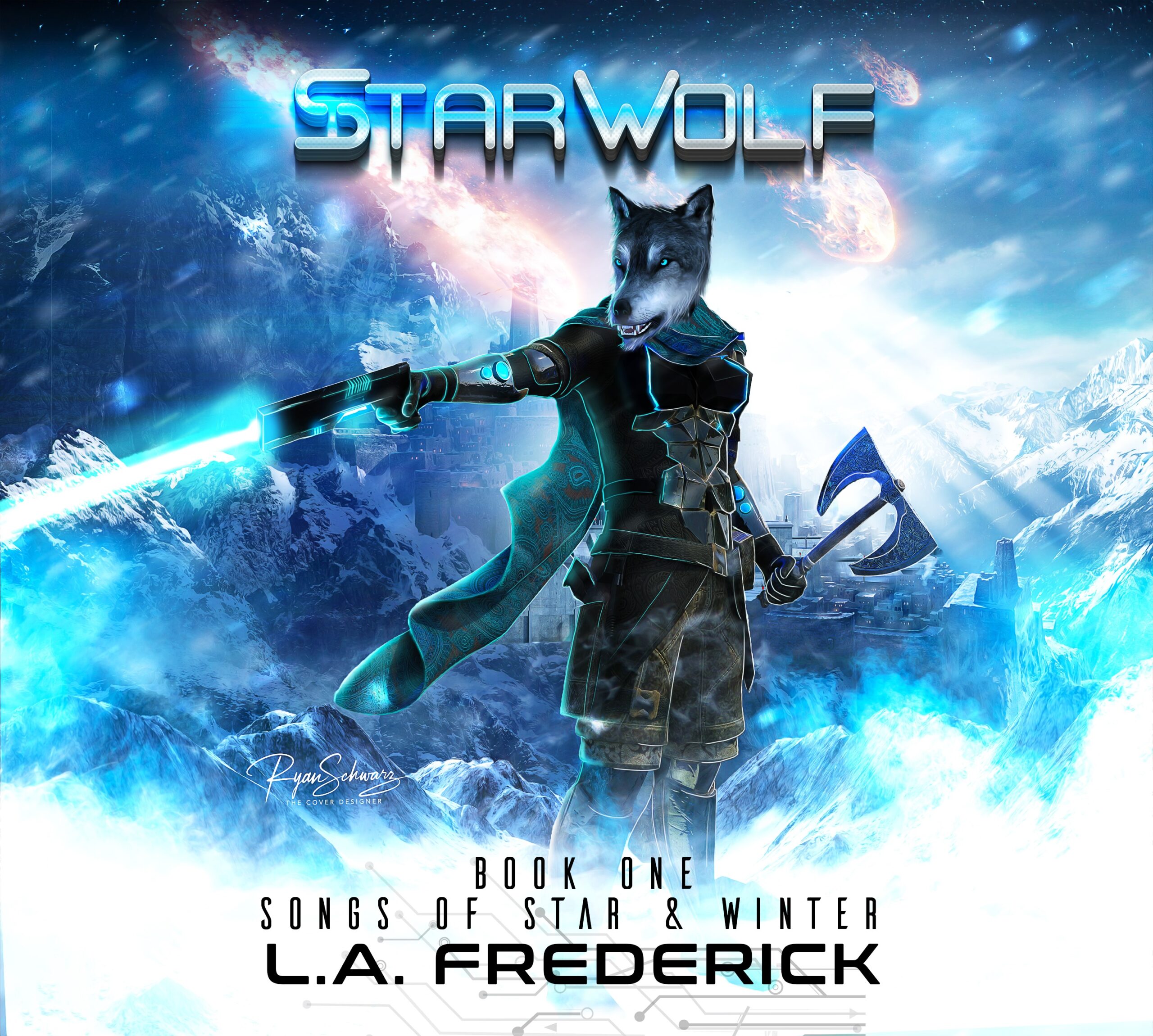 Let’s get straight to the good stuff. I give you the opening chapter from book one, Star Wolf: Songs of Star & Winter. I hope you enjoy it…

‘Sir, what is your order?’ Silence dominated the ambush of Tigers on the flight deck, all eyes focused on their imperious leader, the Winter Tiger. He’s going to destroy my homeworld.

‘Humans don’t deserve to live. Kill them all. Destroy Earth,’ responded the Winter Tiger, a Snow Tiger whose black and white face haunted Lance’s dreams of late. The Winter Tiger’s broad anthropomorphic frame, adorned in black leather and glistening gold armour plate did not shudder, and no hesitation betrayed his reply.

‘No!’ shouted Lance, despite the pain shooting through his battered and bruised body. His outcry earned him another jab to the gut. The Tiger who delivered the blow snagged its claws on Lance’s shredded spacesuit; the soiled white material covered in rips.

An awkward hush followed, only a few seconds, a lifetime and yet the Tiger whose reasonability it was to push the button obliged without fail.

And with a single order, Earth ceased to exist.

Iridescent purplish-blue light shot across the endless horizon of space, and yet no matter how much the brightness stung Lance, the Tigers beaten and bloodied human prisoner, couldn’t turn away from the splendorous beauty of destruction.

Billions of humans and animals dead, on one of the most diverse planets the galaxy housed, with the drop of one Atomic World Bomb. All at the request of the galaxy’s most notorious general. A Tiger without fear, one who lacked an equal in intellectual or fighting terms. He was a warrior of the highest calibre and the Tigers following the Winter Tiger numbered beyond count.

Their technology was too vast for a race as primitive as humans, the irony being humans thought their race reigned supreme over space. Their arrogance led them to believe themselves untouchable, little did they realise the millions upon millions of species residing on Earth were merely the scum of each species.

For thousands of years the Tigers, and all the species of the galaxy, dumped their criminal elements onto Earth, a prison of sorts. It was the ultimate punishment for any species, to be stripped of conscious brain, speech and to be left to rot in blissful ignorance.

A fate worse than death many animals believed.

The annihilation of humans would be the beginning of the Tiger’s primary goal, multiple generations prepared for this and now the plan activated in spectacular, brutal fashion. Earth was wiped from history in the blink of an eye.

The Tiger ranks revered the Winter Tiger, his hardened, scarred face of black and white a constant reminder he stood as one of, if not, the sole surviving Snow Tiger, a rare and elusive creature on the Tiger world, Tigris, if what Lance overhead from his cell was to be believed.

The crew aboard the Tiger Armada’s crowning glory, Darkchurch, all traditional Tigers in the sense their fur was a combination of brilliant orange and jet-black. To Lance they were anything but traditional, these animals walked on two feet and acted like humans, everything he thought to be true about animals was a lie.

To be aboard the Darkchurch a Tiger had to have proved himself in battle a dozen times over, or so the boasts to Lance went, these Tigers were the best of the best, with the scars to match. Darkchurch housed three hundred elite killers, all dedicated to the Elder Three.

The Elder Three, creatures Lance had never met, were the only Tigers above the Winter Tiger in the archaic hierarchy of this ferocious race Lance never knew existed.

The galaxy lay before them, on its knees, oblivious to the events unfolding from a single order.

Earth was just the start from what Lance had gleaned during the intense interrogations he received. They had asked him all sorts of questions and once satisfied they’d left him to stew in their torture room of knives and all manner of horrors.

Humanity’s route problem, they looked out at the stars, planets and everything in-between as unexplored adventure; they didn’t look hard enough. Lance now knew every star, planet or rock was home to a singular race of animals with an agenda; not that he’d ever have the chance to relay his discovery to his fallen race. Most animals were racists, no crossbreeding or mixing with others. Bloody-minded races, their sole purpose in life to protect their own species, some millions of years old, a few billion. Some were said to have existed even before the Universal Beacon illuminated the planets and gave thought and speech to creatures. Lance guessed this was their interpretation of the Big Bang.

The information Lance had learnt as a prisoner on Darkchurch was overwhelming. He’d spent his entire life believing Earth was the only planet that housed life. He figured the fact the Tigers were so free with divulging their plans didn’t bode well for the longevity of his life.

Humans were minnows in the universe’s evolutionary plan. Their overconfidence blinded them to believe thousands of years of dwelling in caves through to the latest fad in the social media world meant they sat above all else in the cosmos.

Lance was pretty sure he was the last remaining human alive in the entire universe, a prisoner aboard the Darkchurch. The levels of unimaginable agony he endured sitting in front of a giant window, gazing out upon the unquestionable magnificence of deep space, reduced him to tears. His race had disappeared in a puff of nuclear dust.

The real plan for the universe…The Origin Wars.

‘Will someone dispose of the human?’ muttered the Winter Tiger, with a dismissive wave of his massive left paw.

The Tigers’ leader would not demean himself by sullying his hands with Lance’s blood. He would leave the task of murdering an innocent man with his team of assassins. Four Tigers whose only interest in life, killing. Damn, they excelled at the task. In the few weeks since Lance’s capture, from the now destroyed moon-base, he witnessed these four Tigers kill hundreds of talking animals.

Animals can talk, are dexterous and on the most part they appear to walk on hind legs. Those Lance had seen anyway, he couldn’t be sure what he observed when they skimmed past an unknown rock to him, those places writhed and wriggled in the most unnatural way.

Hitback, an enormous sour-faced Tiger with sinuous cruel features, stepped forward, always the first to step forward, the Winter Tiger’s second-in-command. He towered over Lance who wasn’t a short man. His grin full of razor-sharp teeth was wide enough to swallow Lance’s entire head if he chose to, which he might. Lance had seen him do it to several unfortunate monkeys. A stench of iron, blood, always followed Hitback when he went near Lance. The five, wire-thin, scars that screamed across Hitback’s furry orange and black right cheek were from a Persian cat he told Lance one evening when he’d drunk a little too much.

The similarities between Earth customs and space animals were uncanny.

Alcohol, a universal hobby, Lance would’ve given his right arm for a neat whisky.

Hitback’s shiny black leather trousers, the standard attire for all Tigers, sported a belt, made from Crocodile skin, full to bursting with knives made from various animal bones. He stood taunting Lance, tapping the hilts of each one.

Hitback wouldn’t be Lance’s killer, he enjoyed watching death just as much as handing it out personally. No doubt if the Winter Tiger wouldn’t demean himself by spilling a human’s blood, Hitback wouldn’t either. Instead the task would fall, and they wouldn’t complain, to either Oakenclaw or Steelclaw, the twins. He could only tell them apart by their eyes, Oakenclaw’s a dullish, lifeless grey compared to Steelclaw’s gruesome, sickly yellow.

Blackfire made up the fourth member of the team but he remained silent, at the back on his haunches leaning against the side of the inner ship. He unnerved Lance the most. Blackfire’s fur was nearly all black apart from a single orange strip, tracing down his left temple disappearing at his neck beneath his golden armour. The furious flame colour matched Blackfire’s murderous eyes. A Tiger touched by fire they called him, another held in high esteem among his vicious peers despite what Lance caught one of his guards say. Something about Blackfire, a veteran in the Tiger ranks, losing command of Darkchurch upon the Winter Tiger’s rise to power.

‘What are you looking at?’ snarled Blackfire.

‘Any last words?’ the silky tones, in an accent similar to Spanish, came from Oakenclaw as he scraped his right paw across a nearby workstation. The light patter of the oak-tipped claws clattered over the control panel. A menacing prelude to Lance’s impending death, though nowhere near as terrifying as the shrill, metallic grating that accompanied his brother’s claws.

‘This one is mine brother, my turn remember,’ said Steelclaw, another with a smooth voice, each word borderline sultry, which made their discussion all the more harrowing.

‘Fine, he’s yours.’ Oakenclaw’s slender face narrowed as he pursed his thin lips. As a parting gift he raked his right paw, a fist the size of Lance’s face, across Lance’s cheek. The result, five deep scratches that poured with blood. ‘I’ll give you that one shot,’ Steelclaw squared up to his brother, whose diminutive six-foot stature mirrored Oakenclaw’s. They each had a matching hair braid, which ran halfway down their backs, a hairstyle years in the making, lustrous orange hair flecked with black and white. The twins were deemed small and wiry among their race, and given what Lance witnessed aboard Darkchurch it seemed a fair assessment.

And yet almost every single Tiger aboard the ship feared the twin brothers.

‘Don’t spoil my fun,’ Steelclaw continued, talking to his brother’s back as he left the flight deck.

The touch of his cool, steel-tipped claws burned worse than his brother’s shot. They toyed with Lance, and from the front of the flight deck he witnessed the Winter Tiger glaring, his eyes wide, fearsome. He never blinked and all the Tigers near him kept a respectful distance, busying themselves with menial tasks to prepare the spacecraft to leave the crumbling mess of Earth.

Not once did Lance catch the Winter Tiger turn to the window to bear witness to the devastation he invoked on trillions of creatures. Instead he stared at Lance, the intensity of his sharp yellow eyes made Lance’s skin shudder.

On occasion the scar running across the corner of the Winter Tiger’s left eye twitched, Lance couldn’t decide if the Tiger harboured revulsion, hatred or anger for him.

All irrelevant as Steelclaw grasped Lance by the throat and hauled him up into the air.

‘My name is L—’ Lance tried and failed to speak.

‘I don’t care.’ Steelclaw crushed Lance’s throat and tossed him aside as if holding a small toy.

As breathing became impossible Lance fixed his eyes on the Winter Tiger who kept the same queer expression on his face as Lance shut his eyes for the last time.

‘And so we begin,’ Lance thought the Winter Tiger uttered as Lance slipped off into death, the last living human in the galaxy gone, humans wiped from existence. ‘Take me to The Council of Worlds. The fools will want their report.’